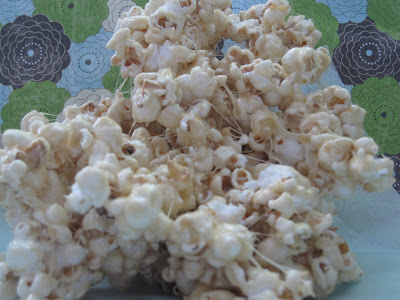 If you ask me, some of the best and most treasured recipes I have, are actually from my neighbors. I have coveted some recipes, and spent many a day in the kitchen trying to replicate them. Sometimes, if you are lucky, they share...I mean actually give you the real recipe and not some "not quite right" version. I think it is important that when you are gifted with a recipe, that you give credit where credit is due. It drives me crazy when I partake of a dish that I know is a shared recipe and the cook doesn't acknowledge the creator. What do you think?

I love this caramel corn. It is so easy and is totally decadent. My neighbor, Christine Lewis, many years back, made this for a candle party. She was forever my favorite neighbor after that. I am not positive that this is exactly her recipe...but I think it is close. I rarely use pre-packaged products, but the popcorn that is pre-popped works best. The reason is, that it doesn't have all of the stray kernels and smaller kernels and it makes it extra buttery and salty...but twice as bad for you. In the picture above you can see that I didn't use the pre-popped stuff, but rather I popped my own white corn. It is a bit healthier that way...but the kernels were definitely smaller and you get some harder kernels inside the puffed corn. Either way...it's yummy and the bowl will be gone quickly!

In a saucepan melt the butter. Add the brown sugar and stir until dissolved and bubbling. Remove from heat and add the marshmallows and stir until melted. Next add the vanilla and mix well. Now split the popcorn into the two grocery bags and then pour half the marshmallow mixture in each of the bags. Shake and manipulate the bags until well mixed. Form into ball or serve in a bowl.