my bread and butter... brought to you by Nature's Pride

WRITER'S NOTE: In addition to this being a completely divine dessert, I have found that this was an absolutely decadent breakfast as well! 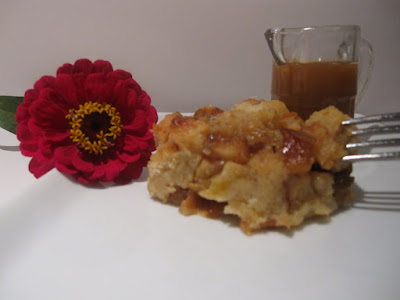 Recently, I was offered the opportunity, by the Foodbuzz Tastemaker Program to try a Nature’s Pride product. The challenge was to use the product in a recipe and win one of six spots to go to the Foodbuzz Blogger Festival in November. Well, of course I was game for that! I was even more excited when a coupon arrived and I discovered that I would have my choice of more than fifteen Nature’s Pride products. When I went to the store, I knew instantly what I would prepare.
As you know, I often profess, that I feel it is important to feed my family as healthy as possible. I try to provide sustainable, organic and natural foods. So I was glad to see Nature's Pride would fit right in. I had been to the farmers market just days before and purchased some beautiful Jonathan apples, and fall is whisping through the air. I intended to make white chocolate caramel apples with them, but I ended up deciding to pair those crisp tangy apples with Natures Pride Country White Bread.
I ended up choosing to prepare a Bourbon Caramel Apple Bread Pudding. I haven’t ever made a bread pudding with sandwich bread and I had my reservations. I don’t typically buy white bread. When I opened the bag I was tickled to find that the bread was wrapped in cellophane as well. 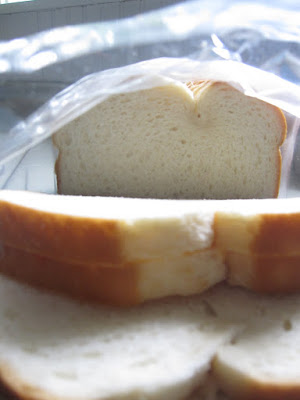 This reminded me of the bread my grandma used to buy and make me cinnamon toast with. When I opened the cellophane wrapper, I was met with a rich smell…who doesn’t love white bread when they were little?
The slices are hearty and large…perfect for a sandwich, but even better for bread pudding. I would have used a whole bag but Ruby snagged a slice before I could dice it all up. 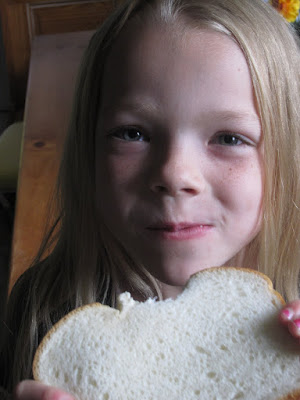 The following is the recipe, but before you get to that, I would like to tell you how it turned out.
I make a lot of desserts, and although my kids and love them, my husband isn’t always so excited. He doesn’t crave desserts like I do. But let me tell you there wasn’t a crumb left a few minutes after I scooped into the bread pudding. My husband said it was by far one of the most decadent and delicious recipes I have whipped up in a while! Wow! What a review. I was so pleased with how Natures Pride bread held up in this dish. I am going to try it in a strata next. I am definitaely a fan.Thank you Foodbuzz and Nature's Pride for this fantastic opportunity...I hope to see you in November at the Foodbuzz festival! 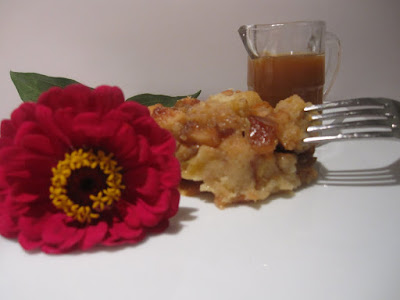 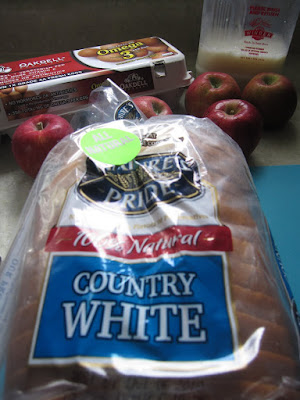 In a saucepan bring the milk, cream, and bean to a simmer. Beat the eggs and sugar until light. 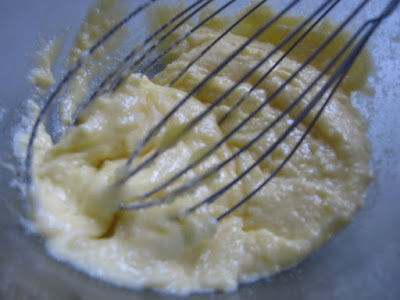 Temper the milk mixture into the egg mixture slowly. 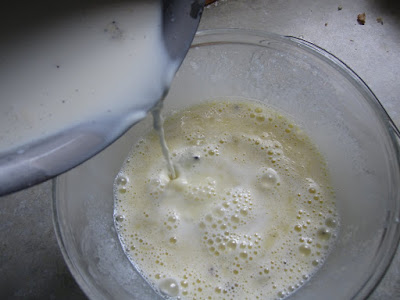 Return the combined mixtures (custard now), to the stovetop and simmer, stirring constantly until thickens. 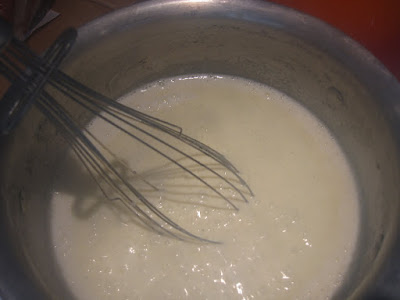 In a shallow pan, cook the apples and brown sugar on medium high heat, until the apples begin to soften and the juices and sugar caramelizes. 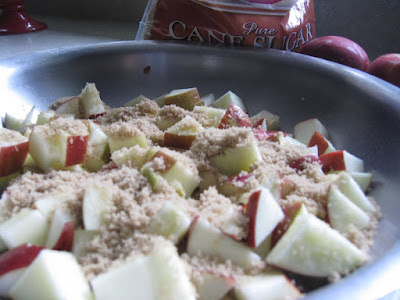 Carefully add the bourbon making sure that it does not come close to the flame. 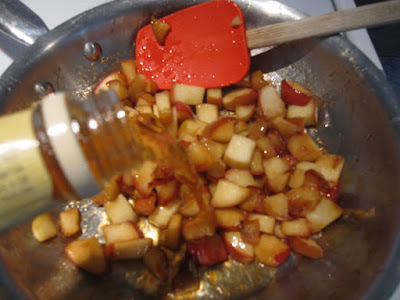 Cook on medium for just a few minutes until the caramel thickens. 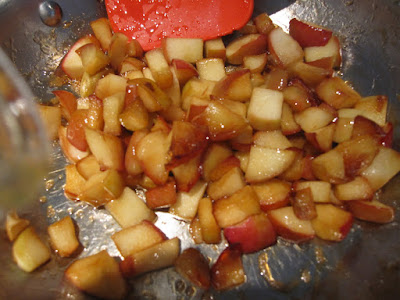 Meanwhile, cut the Natures Pride Country White bread into small cubes and place on a sheet pan and toast in a 350 degree oven for fifteen minutes or until crispy and golden. 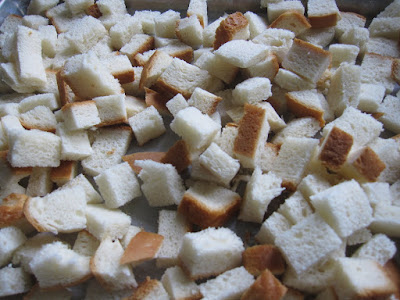 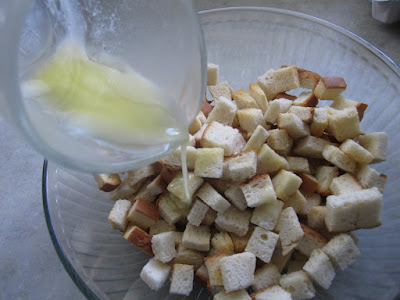 and the cinnamon sugar in a large bowl. 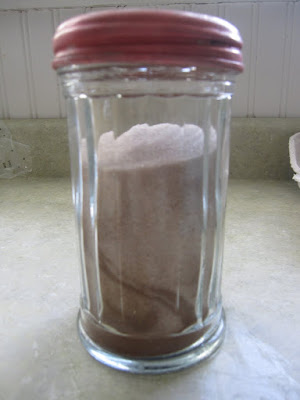 Next, Pour the custard over the cinnamon bread cubes 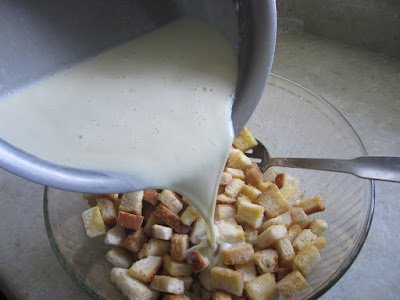 and add the white chocolate 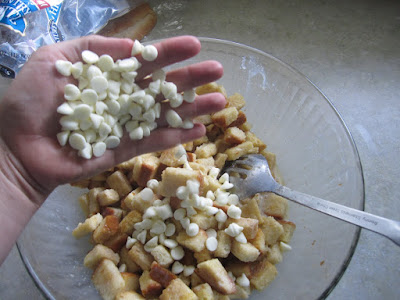 and the bourbon apples and caramel 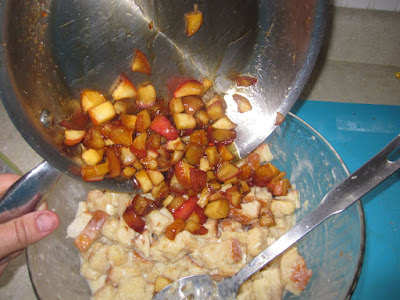 Soak for ten minutes, and then place into a buttered baking dish. 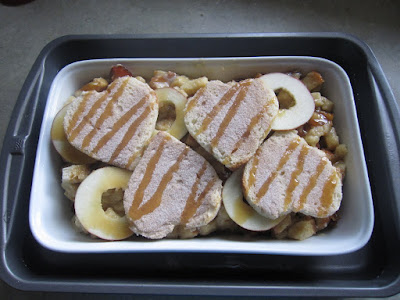 Cover with aluminum foil and place into a water bath (by placng the baking dish into a larger dish and filling the larger dish with water half way up). Bake at 350 degrees for an hour. Cool slightly before serving and drizzle with caramel if you wish. 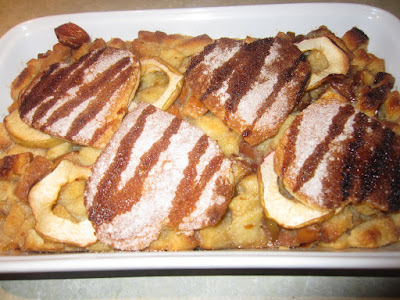 I had cut heart shapes out of a few extra slices of bread and sprinkles them with cinnamon sugar and drizzled them with caramel as well. Bread pudding isn't exactly the most exciting dish, visually, when it comes out of the oven. However, it can easily be dressed up to make an elegant dessert to pair with any meal. 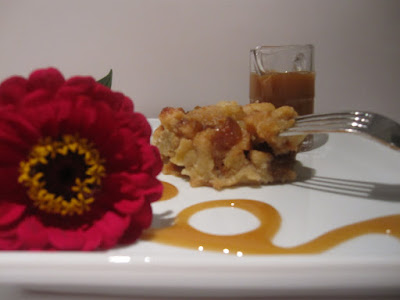 If you enjoyed this post then please feel free to join

Sounds delicious. I do like a good bread pudding. And now, off to school.

Oh wow, Sara, I love bread pudding, and yours looks delicious! I'm glad you you decided against your mid-life crisis :)

This sounds positively yummy and having just come back from KY, the bourbon is especially enticing! Your pictures are great!

What a great opportunity..all the best! This recipe sounds divine and it's already past the family critics,I've never made B&B pudding but what a great idea!

Oh my my...this looks sooo delicious. This one is a must. Thank you for sharing.
-Dorcas
4sweetangels.blogspot.com

Love the step by step pics. You make it look so easy and sound oh so yummy! Thanks for linkin up to tasty tuesdays!

I enjoyed class last night. Who knew you could make so many things look like cupcakes. Thanks again for improving my cuisine.