harvard beets...they're all the rage.... 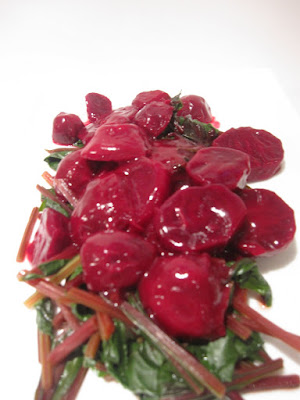 Harvard Beets, were supposedly created by a Harvard student (or a Yale student), there is also a story that they originated in a tavern in England named 'Harwood' and the 'Harvard' is a mispronunciation of the name. What is it about the English and the French that they take credit for everything? Just kidding...kind of. Anyway, a Harvard Beet is one cooked in a thickened vinegar sauce. Sound gross to you? Trust me, they are oooh so good. My kids even love these, even the picky one. And it is so much fun when they come running in the next morning worried that their #2 is red...lol. I read up on this phenomenon, and found that if your urine is red after consuming beets, that you might have an iron deficiency...but no word on the stools. Oh don't act surprised I am commenting on red poo poo...you all know what I am talking about.
It is my opinion, that the method in which a person was prepared a dish, when young, can taint his or her opinion indefinitely. Most people seem to have grown up on "boiled" vegetables...and I must say, if you are one of those people, I can understand why you might not love your vegetables. I usually prefer roasted vegetables to most cooking methods, due to the fact, it brings out the natural sweetness as well as the fact that you do not lose the nutrients into the water.
Beets are one of my favorite vegetables. I love the vibrant colors and flavors that a beet produces. I have found people either love them or hate them. For those who generally hate them, I always suggest that they try roasting them in a bit of olive oil with a dash of salt and rosemary. The roasting, brings out an intense sweetness that makes them a bit more favorable to the "haters".
To roast beets, start by removing the greens and setting them aside. Preheat the oven to 375 degrees. Scrub the beets well and place them on a foil lined baking sheet. Drizzle the beets lightly with olive oil. Fold the foil over to make a packet and place in the oven. Smaller beets will take about 20 minutes or so and very large beets can take up to an hour. To test for done-ness, Pierce with a paring knife. It should glide right in. Set out to cool until you can handle them. The skin will sluff right off easily. You can serve them immediately or use them in a recipe like the one that follows.
As far as those greens go, I love them too. I usually just saute them or steam them. In thecase of the harvard beets, I didn't mixt themm in the sauce, but rather, served them under neathh the sauced up beets. I hope you try these out, they are totally worth it!

In a saucepan, combine vinegar, juice, cornstarch, brown sugar, five spice, and salt. Stir over medium heat until thickened. Add beats and coat completely. Stir in butter and melt while reheating the beets. 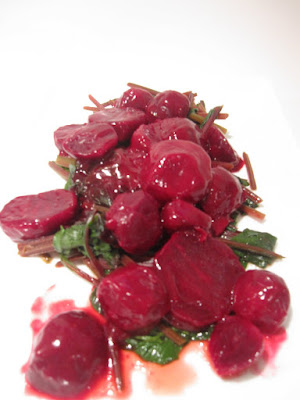 I love beets! In fact, I craved them during my pregnancy, but had to restrain myself because of gestational diabetes!
PS Surprise for you over on my blog.

I love beets! I even put them in a smoothie once! It wasn't good - but it was pretty. I love the sound of these - my favorite way to eat them is cold with oil and vinegar.