I hope you had a wonderful Labor Day weekend...sorry, I have been off the radar for a week, I was at a horse show. I'll make it up to you this week with a few extra posts.
The following recipe is probably the most requested recipe in my arsenal. It is an amazing Banana Cream Pie with a super yummy coconut crust. But the real clincher is the bruleed bananas on top. I like to serve it with caramel and chocolate sauce (because it's not decadent enough on its own). 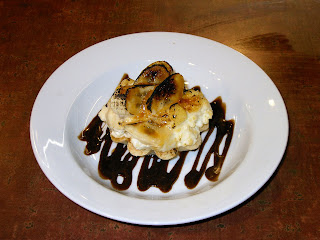 In a bowl dissolve the starch in water. Then mix in well the milk. Over medium heat in a heavy sauce pan bring the mixture to a boil (stirring constantly with a rubber spatula. If you use anything else it will burn to the bottom.) Temper the milk mixture into the egg yolks. Add the tempered egg yolks into the milk, and stir until bubbly. Remove the mixture from the heat and pour into a bowl. Add the butter cubed and the vanilla and mix until smooth(a hand held mixer works great for this) Cover with plastic wrap to cool.
Fold the whipped cream into the custard. Just before serving fold fresh cut bananas into the pudding. Spoon into the shell and top with sliced bananas. Sprinkle the top with sugar and then brulee the top.

In a cuisinart combine:
3 cups AP flour
1 ½ cups sweetened coconut
1 ¼ tsp. salt
Mix until blended. Then add:
2 ½ sticks cold and cubed unsalted butter
pulse until the mixture is coarse textured.
Add up to :
½ cup ice water
Add to the above mix until the mixture comes together.
Press into tart molds and blind bake. Blind baking with weights for about 15 minutes. Remove the weights and bake for another 5-8 minutes.

What does to bake blind mean?

Blind baking is another term for pre-baking, and it refers to a pie or tart crust that you partially or completely bake before it is filled. This is done in many cases to help keep the crust from becoming soggy from a wet fruit filling, or so that you have a cooked crust if you are filling the pie with something already cooked, such as a custard.


Generally to pre-bake a crust, you roll it out and put it in the pan. To keep the bottom from puffing and the sides from falling, you should line the crust with parchment paper or a large coffee filter, and fill it with beans or rice. There are special pie weights on the market, and some people might encourage you to line the crust with foil, but Rose Levy Beranbaum, author of The Pie & Pastry Bible, says you should use neither. The foil keeps the crust from beathing, she says, and the weights are simply too heavy, often producing a "cardboard-y" crust.

Make sure to gently push the beans or rice up against the sides of the parchment or coffee filter, to keep the sides of the crust from collapsing in the heat of the oven. Place the crust in a hot oven (say, 425°F; 220°C), which will help set the flour in the sides before the fat starts to soften, and bake for 20 minutes. Carefully remove the weights and liner from the crust, prick the bottom with the tines of a fork to allow steam to escape, and return the crust to the oven.

**Blind baking information gathered at ochef.com
If you enjoyed this post, be sure to visit my friend over at

Seriously, that sounds like the most amazing banana cream pie ever. I love the coconut crust. Great recipe - bookmarked!

yum! Will have to try this one out - I love banana cream pie!

I think I might have died when I read 'bruleed bananas". I've never made a banana cream pie, but this looks and sounds divine.

Oh my gosh, coconut crust and bananas? I'm in heaven thinking about it!

I signed up for your Country Living and O'Cupcake classes. I am so excited for more yummy food.

There is something just heavenly about banana cream pie...right girls? KVA..looking forward to seeing you there!