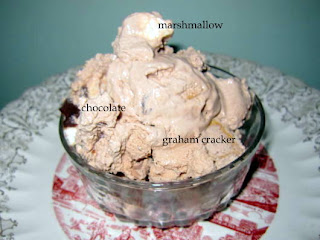 Unfortunately, I have a nut allergy. I won't end up in the hospital (I don't think), but I get ridiculous canker sores in my mouth. This proves to be a problem for me, because I do love most nuts. The good news is that peanuts don't bother me...so maybe it's just an aversion to tree nuts. There is a reason I tell you this, because this nut nuisance had ruined my love affair with rocky road ice cream. Note, that I said "had", because I discovered a tasty substitute for the nuts. Early in the summer Dryers ice cream put out a "seasonal" flavor of S'mores ice cream. I didn't hesitate purchasing it, as I have a bit of a thing for marshmallows, chocolate and graham crackers. Let me tell you, it is nothing short of awesome! I know this for a fact, because I think I single handedly emptied out the local market's supply.
But you know me, I'd rather make it, so I set out to create my own delight. It was kind of like Bobby Flay's "Showdown", first I researched. My research revealed the following points:
First, the right marshmallow has to be used, not marshmallow whip. Mini marshmallows work fine, but I preferred to cut a large marshmallow up for looks (but it won't affect the taste).
Second, I didn't want to use chocolate chips....I like flakes and flecks a bit more. I purchased a product called Magic Shell to achieve that texture. However, I don't love the waxy taste of that chocolate so maybe I'll try something else.
Third, graham crackers aren't super sweet and I felt they would get lost in the ice cream and maybe a bit soggy. The Dryers version had an almost cookie like graham instead of cracker like. I purchased a Keebler pre-made graham cracker pie crust and broke it into pieces. It was definitely a great idea and super yummy!
Fourth, I didn't want it to be to chocolaty. So I used just a bit of good cocoa (Callebaut)to give it just a hint. So here is the recipe:

In a heavy saucepan, combine the milk, cocoa, and salt and scald. Meanwhile, beat the eggs and sugar together until light and fluffy. Temper the milk into the eggs carefully so as not to curdle the yolks. Cook the custard over medium heat, stirring constantly, for 4-5 minutes the mixture will bubble and thicken. It should coat the back of a spoon and you should be able to run your finger through the custard and it will leave a clean line. Stir in the vanilla. Cool mixture completely-over night is always ideal, but at least a few hours. freeze according to your manufactures instructions. Remove the ice cream from the machine and transfer into a freezer container. Squeeze the chocolate shell in lines over the top and allow to set (it only takes seconds), Gently fold in the mix-ins and refrigerate for a few hours.

I'm pretty rough on myself, so in the end I didn't quite think it hit the mark, although it was pretty good. However, my guests loved it...and there wasn't a drip to be licked. In hind sight, I think next time I will toast the marshmallows! Sounds like just the thing to step it up.

If you haven't entered my giveaway partenered with CSN online stores, please be sure to do so before Monday....I am so ecited to give the $40.00 gift card for Le Creuset away! Remember to enter, check out the details in this post,and enter on that same post. The winner will be announced Tuesday. Good Luck!

Sara, I love anything s'more. This sounds phenomenal!! I wish I could have some right now. Thanks for posting such a wonderful recipe!

You had me at S'more. So sorry about the nut allergy. But wonderful recipe!

Smores & ice cream? Together? Oh yes, I'm definitely making this! My family thanks you in advance.

Loving this recipe!!! Sorry about your allergy :(

What a fabulous ice cream flavour. I bet it was a pleasure to gobble this up.
*kisses* HH

I love s'more so in a ice cream oh you don't know how happy you just made me...yum


sorry about your allergy!!