Quit looking at My Bundt!

I have an insecurity. I feel the need to talk it out with you. Because you love me....right? You don't judge...that's why I like you....just the kind of friend I value.
You see, I have made cakes for years. I love to decorate them. I take a lot of pride in the finished product. The problem is, that people come to expect it always. One day I was in charge of bringing a dessert for a family reunion. I brought a bundt cake. It was a lemon bundt with a lemon glaze and tons of fresh blueberries...it was yummy. The problem came from a comment that my mother made....she said..."I'm surprised you brought a bundt cake...you took the easy way out." It was on that day, I quit making bundt cakes for other people. I surely didn't want people to think I was copping out on my dessert responsibilities!
But, sometimes the end of a meal calls for simplicity. Bundt cakes are elegant but simple. I love how dense they are. I had a bunch of people coming over for Mother's Day and I wanted to serve a simple dessert...so I made this. It was a big leap. My bundt cake pans were happy to see me again. But I still have to admit I was worried that people might have thought I had lost my baking pizazz. No one said a word..not even mom. So what do you think....lazy or not? I will tell you one thing....It was tasty! 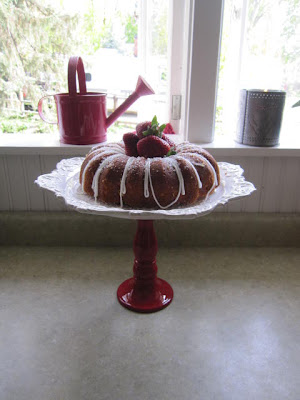 Bundt cakes are so nice, because they are easy and don't require frosting. So they are the perfect last minute dessert. 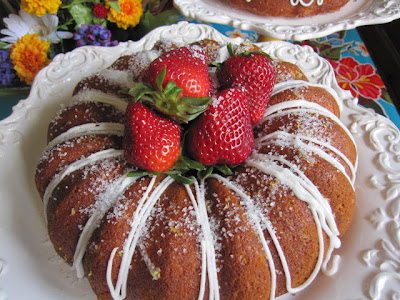 Perfect Vanilla Cake
4 egg whites, room temperature
1 1/2 cups sugar
3/4 cup shortening
2 teaspoons vanilla
2 3/4 cups flour
1 Tablespoon baking powder
1 teaspoon salt
1 cup milk
Preheat oven to 350 degrees. Prepare a bunt pan with butter and flour. With an electric mixer, beat egg whites until frothy and sprinkle 1/4 cup sugar into it. Whip egg until medium peaks form. Set aside.
In a mixing bowl, cream remaining sugar and shortening. Combine the vanilla and milk. Sift dry ingredients into the shortening mixture and mix alternately with the milk. Just mix until well combined, but do not over beat.
Fold the egg whites gently into the heavy mixture. Pour into prepared pan. Bake for 25-30 minutes or until cake springs back to the touch. Remove immediately from pan onto a baking rack. 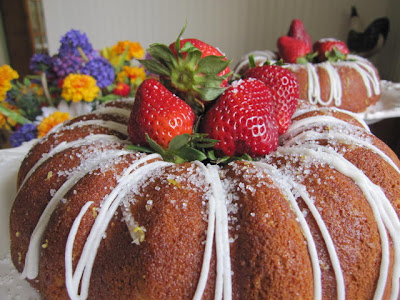 I just garnished it with fresh berries and a simple buttercream drizzle. 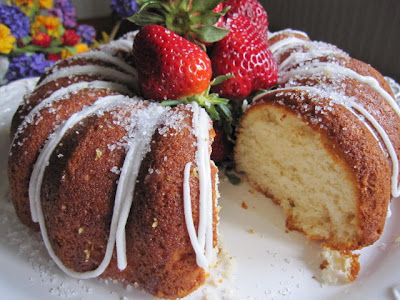 The cake has a nice crust and is so moist inside. I served it with macerated strawberries and fresh whipped cream. 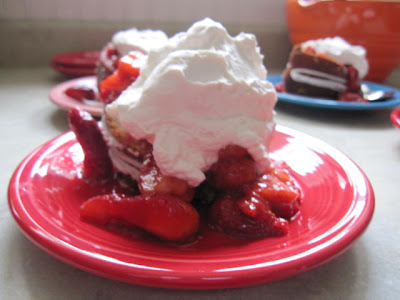 Bundt cakes aren't taking the easy way out! It's hard to pour the batter into those pans, ha ha! :) But really, I do love a good bundt cake... who doesn't???

Wow. So pretty!! ps. If you are nice enough to bring dessert (of any kind) people should not complain!

I love your new look...
your bundt cake is beautiful...I love the pics..hey if anyone brings me a homemade anything, I would LOVE it..

Bea-ut-iful! It looks so delicious and very pretty.

Well, you're ahead of me. I took a purchased cheesecake to a family get together once and you should have seen the looks on people's faces. Your bundt cakes looks gorgeous. I don't even own one of those pans...

Thanks for all of the great comments gals...I would invite you all over for a slice if I could. People shouldn't cmplain, i agree with you Erin...especially moms! Thanks Bonnie, i'm still working on it...the cupcakes were getting outdated.

They are beautiful. Do they taste as good as they look?

I've never made a bundt cake before, but this looks really yummy! Such a shame I don't have a bundt pan =[ Might try this in a normal pan though.....

I just tried signing up for your cupcake class at Thanksgiving Point but it was full so I am on the waiting list.:( Do you know if you will be teaching the class (Cupcakes) again at The Finishing School?

Steph,
e-mail me and I will see if I can get you into that class. I taught it last week already at the finishing school. voortmeyersr@yahoo.com

Thank you so much for your comment! Are you on Food Buzz?

Yes I have seen Waitress and I own it as well - such an adorable movie!

Great blog you have here, and I love the title of this entry!

I have grown to love bundt cakes! I used to think of them as old-fashioned but they can really be quite delicious. Yours looks scrumptious and so pretty with the berries!

Bundt cakes are not lazy ... they're beautiful and delicious! I completely agree with you about the texture too. No way are you taking the easy way out when your cake looks this fabulous!!

Nice blog!
Personally I would be thrilled if someone brought such a delicious looking bundt cake to my house, especially with macerated strawberries. Yum.