Guess Who's Coming To Dinner......BERTOLLI

I don't know about you, but the months after the Holiday season are a bit depressing for me. Of course I love the frills, trees, food, and festivities...but my favorite part of the season is the mailbox. Seriously, I can barely wait to trudge through he snow to be met by all colorful greeting from around the world. It's like getting a little visit from those I love. So, when January comes around...I am sad. I am met with junk mail and bills.....
When the doorbell rang the other day, I was surprised to find the FedEx man standing there with a package. OOOOh Happy Day!!! I ran to the kitchen and quickly opened the box to find this waiting for me: 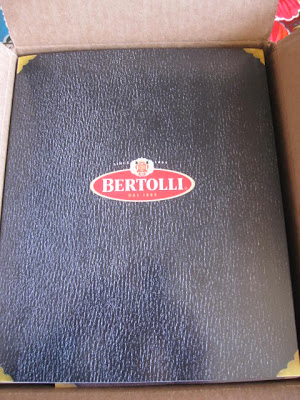 Cool packaging hugh? Bertolli! The package was part of the Bertolli and the Foodbuzz Tastemakers program. As part of the program, I sometimes get to try out cool new flavors from Foodbuzz's partners. Click on the Foodbuzz window to the right--}} and join...if you do, you can hang out with me and tons of other talented foodies virtually! And when you join, be sure to go to the Bertolli page and become a fan. 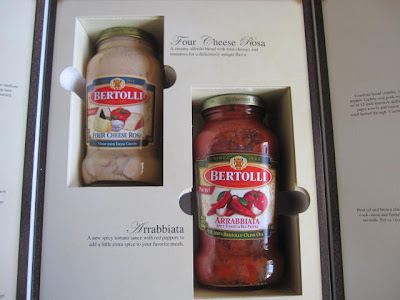 A beautifully packaged bottle of Four Cheese Rosa and Arrabbiata pasta sauces. I was so excited by the Arrabbiata sauce, as it is a spicy tomato and red pepper sauce. We all know how much I love a little kick in the pants! I could barely wait to try out these new sauces. So I called a few friends and had Friday Pizza Night. I made my home made pizza dough that rised so beautifully in the oven. The recipe for the dough is at the bottom of the post. 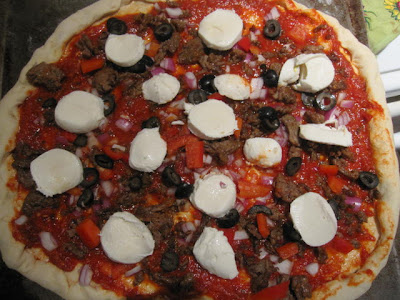 Now the Arrabiatta sauce screamed sausage to me, so I answered the call..and threw in some red onion, fresh red peppers, black olives, and fresh buffalo mozzarella. I used a spicy Italian sausage...yummy. 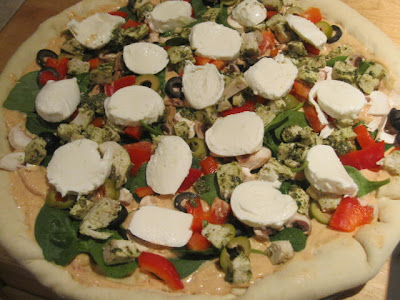 The second pizza, I made for my little brother, Andy....at least that was my intention. He loves a chicken pizza with white sauce. So I topped the Four Cheese Rosa with spinach, green olives, black olives, artichoke hearts, bell peppers, mushrooms, buffalo mozzarella, and chicken tossed with fresh pesto. 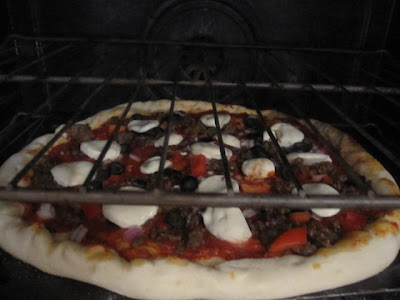 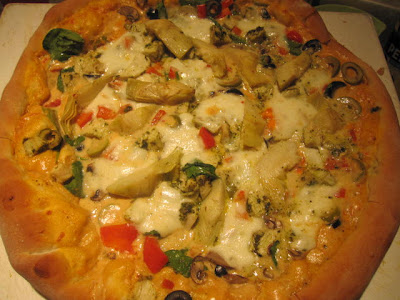 The Four Cheese Rosa,was decadent, I'm not much for creamy pasta sauces, but this will be an exception. That pizza I made for my brother....well, I kind of ate more!The sauce is a creamy rose colored sauce...pretty. It consists of tomatoes, fresh cream, Romano, Aged Asiago, Parmesan and Ricotta cheeses. I would have enjoyed all of the pizza's ingredients tossed with the sauce and served over pasta just as well. I am going to name this pizza THE BLUSHING CHICKEN 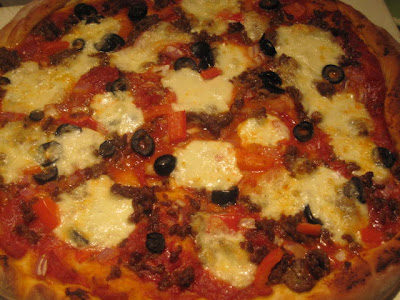 The Arrabiatta, was wonderful. Don't be worried that it is too spicy...it's not. I still added pepper flakes to the pizza. If you love roasted peppers and tomatoes, you will love this sauce...the flavors were rich and complimented the sausage perfectly. I am going to name this on THE DIABLITA 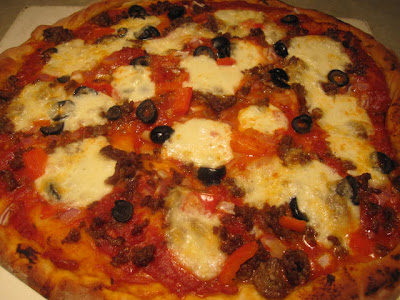 Now, I know some of you are surprised that even used a bottled pasta sauce, as I typically don't. I really do cook pretty much everything from scratch. But, when I do find something that tastes fabulous and can cut a bit of time...I make some exceptions. I have enjoyed other flavors such as the Tomato Basil sauce and the Vodka sauce.
Pizza night was an absolute success. There wasn't a crumb of pizza left over.


Place the water in a medium-large bowl. Sprinkle in the yeast and sugar, and stir to dissolve. Let it stand 5 minutes, or until the mixture begins to bubble.
Stir in 1 cup of flour, the salt, and 1 tablespoon olive oil. Beat for several minutes with a wooden spoon.
Add the spices and remaining flour 1/2 cup at a time, mixing after each addition. The dough will be soft but should not be sticky.
Turn out onto a floured surface, and knead for several minutes. Place in an oiled bowl, cover with plastic wrap, and let the dough rise until doubled in bulk. This will take about 1 hour.
Punch down the dough, and return it to the floured surface. (This is the point at which you can freeze the dough for future use.)
Preheat oven to 500 degrees. Roll and stretch the dough into one large pizza round or 6 small pizzas. If you want to make a pizza bread sticks that will work too. Reduce heat to 450 degrees and bake 10 minutes.
Posted by Sara at 6:33 PM

Your pizzas look delish! I have to give your pizza dough a try - been looking for a different one than my usual. Haven't tried the sauces yet.
Wasn't the packaging fancy on these? I felt special!

you felt special because we ARE special!

great post i love your pizzas they look amazing!!