Momma always said.....bless her heart when she was annoyed with someone.....

Have I told you lately that I have six mouths to feed besides my own? That of course does not include the dog or the cat. Have I told you lately that my parents live next door, so fairly often I have eight mouths to feed? And my grandparents live a little over a mile away, so on occasion, I have ten mouths to feed. But on a daily basis, I have six other mouths to feed..two of which are teenagers, one of which is a vegetarian.....One is 86 years old and likes only buttery, white, bland, fatty and sugary foods.....two of which are 4 and 6 and can be a pit picky....and one who has high cholesterol...the dog...she is easy! You kind of have to like to cook, to put up with all of this, I thank my lucky stars daily that I don't have to deal with allergies or tougher medical conditions...bless those of you that do.
Now, I am going to tell you a secret....put your ear up to the monitor, because I am going to whisper it....Grandma drives me crazy! I bust my hind end daily to put out fabulous food, and I glare viciously at any one who dare turn an eye at anything I cook...that was how I was raised...if you didn't like it.... pretend you did.... if that didn't work.... cover it with ketchup...if that didn't fix it...swallow it with a couple of gulps of water. Grandma, wasn't raised that way? I question this because she lived through some pretty tough times. But she says she can eat what ever she wants...I agree....if she cooks it.
I'm not going to spend all night complaining about grandma....you wouldn't think much of me if I did that...I am just going to say that she doesn't much appreciate my cooking....She confided in my husband last week that she just plain doesn't like most of it....guess that's her problem....she is stuck with me. And really, I do always keep on trying to please. So, now to the matter at hand. This is grandma's recipe...there is nothing cute, or fancy about it. As a matter of fact, I have added some garlic (she would kill me if she knew), some peppers, chili sauce, and upped the paprika a bit (I like the smoked stuff). This recipe is basic, quick, and kids do like it. I mean who doesn't like macaroni? Just don't tell her I posted it...she'd get all big in the head....Bless her heart**......I'm going to hell in a ham basket aren't I?


According to Wikipedia:Goulash is primarily a soup, also existing as stew, originally from Hungary, usually made of beef, onions, vegetables, spices and ground paprika powder.[1] The name originates from the Hungarian gulyás ( IPA: /ˈgujaːʃ/ listen (help·info)), the word for a cattle stockman or herdsman. 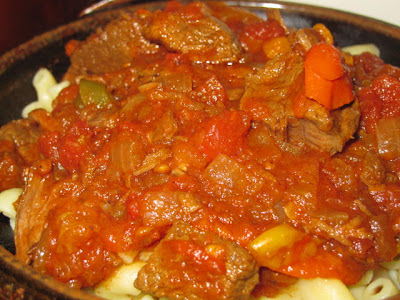 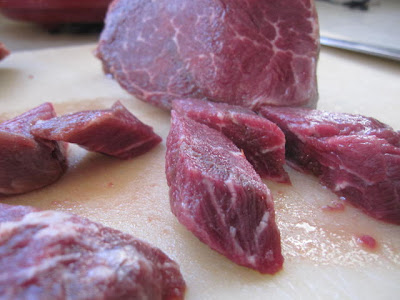 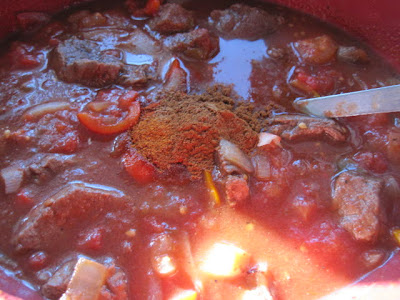 In a frying pan, combine onions, garlic, peppers,and beef and cook until browned. Pour into a crock pot and add remaining ingredients. Cook for four or more hours -kindof one of those all day recipes. Serve over a hearty pasta. **OH BY THE WAY, I TOTALLY LOVE GRANDMA. 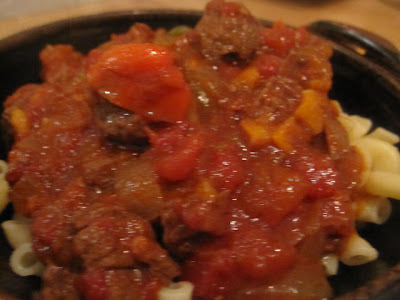 So funny! Don't be offended. I wish I lived by you so I could be one of your regular mouths to feed. I've never had any food made by you that wasn't fabulous and when I make them, they are always requested for others. Feel free to report that to Grandma.

I love that story, I also live next door to my parents and weekly send food to my inlaws- We know you love grandam!! We won't tell!! Love the recipe!!