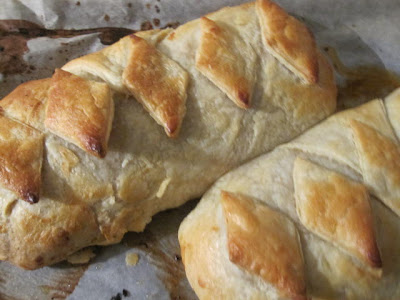 Leftovers...I have never loved them....never liked them. They are generally boring. Now, chili, lasagna, spaghetti, and tuna noodle casserole, are the exception. But, meat, salad, potatoes...I jut don't enjoy eating twice. So typically, I just cook what we need. Sunday, I cooked a very lovely rump roast and had more than plenty left over. I know most of you would have had a sandwich the next day...but I am strange I know. So, Monday night, I ignored it, and made some chicken tacos. Tuesday, it was screaming out to me from the fridge. "Please Sara, please make me into something fabulous!"
And I said "But you are a boring leftover, and I don't have any great ideas."
And then the heavens opened and an angel descended and spake unto me:
"Sara, do not deny this good meat a place at the table...let there be creation."
Ok, so that didn't happen, but it would have been cool if it had. Really, I just stood in front of the fridge until I came up with this idea. The problem is that it doesn't have a name...just a temporary name. 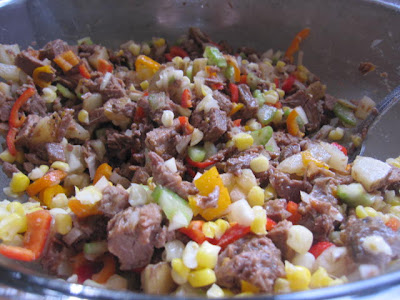 So just combine all the ingredients in a bowl 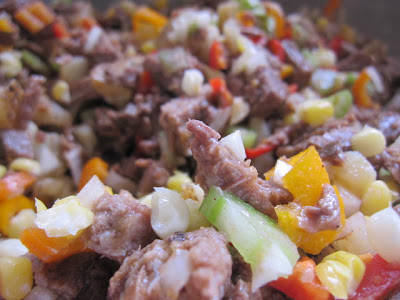 This is the meat version 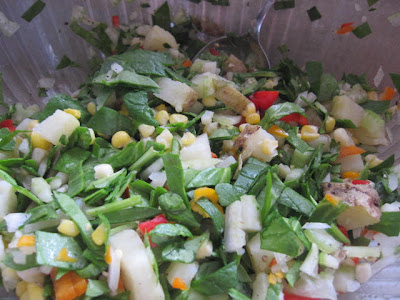 This is the veggie version 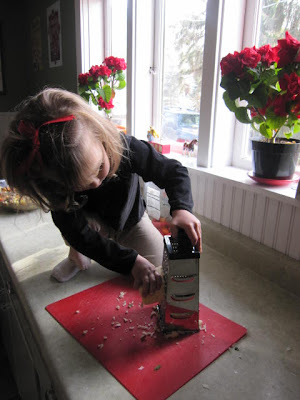 This is my littlest grating my cheese...I start them early. Note: that she went from the chair at the counter to the counter top....and look at how she had to pose her body to have the strength to grate the cheese. 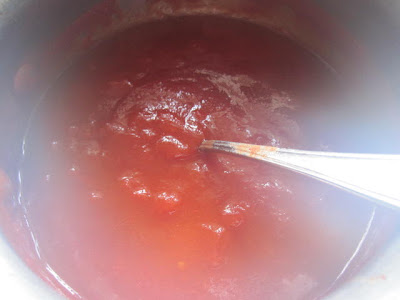 Now, heed my warning: this BBQ sauce is super simple, and you will regret it if you don't make it. Store bought will change everything. 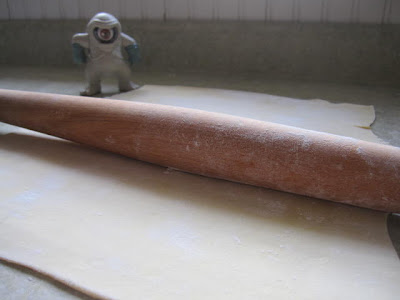 This is my alien supervisor, checking the quality of my puff pastry. 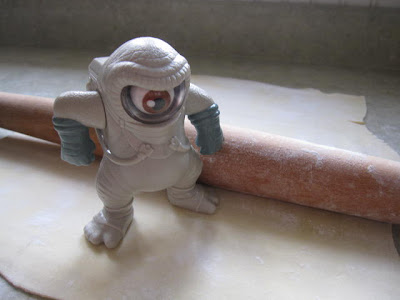 it is important to roll it out, so that the folds are gone. 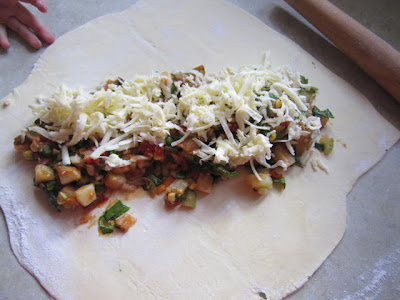 Each recipe will make 2 rolls. So divide the filling and cheese between the two. 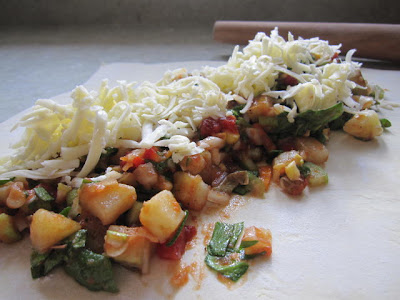 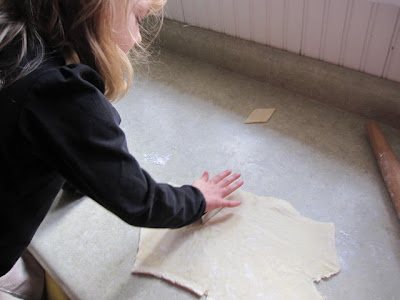 I had an extra sheet of puff pastry, so I had my little sous chef roll it and cut diamond shapes out. 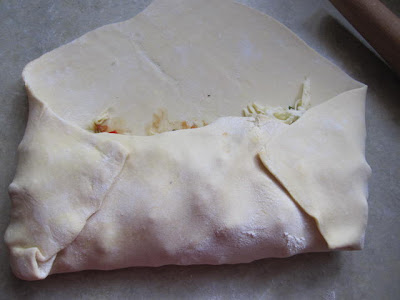 Then fold it like an envelope and then roll it. 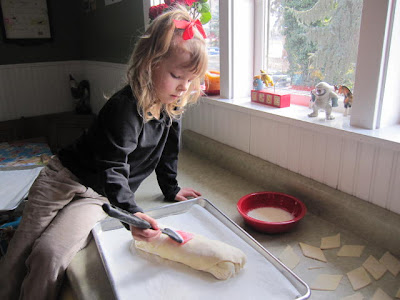 then mini me brushed each roll with some cream and arranged the diamonds on top. 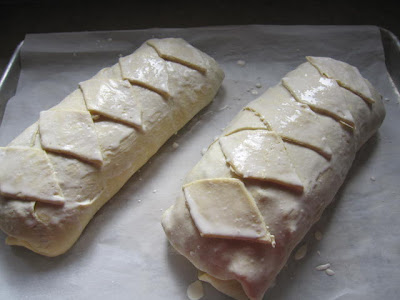 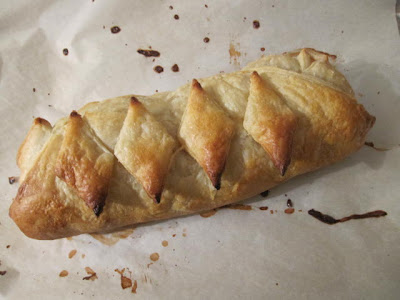 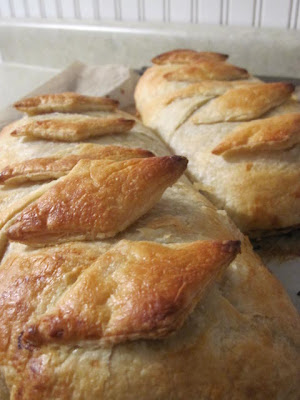 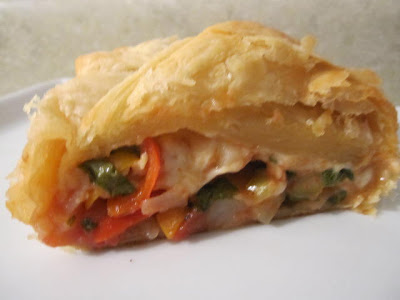 This is the veggie one....my favorite of the two. 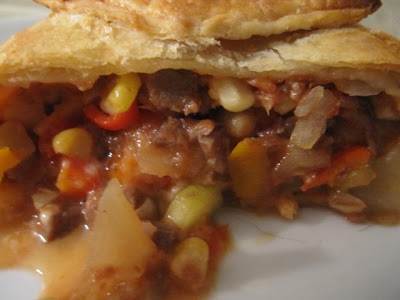 This is the meat one. 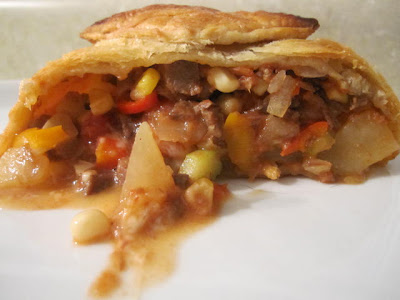 Now let me tell you, this smelled so good. I was so excited, that I took them to my brother's Lost Party...where they were gobbled up by confused fans. It was suggested that I name them Lost Pie (I don't love that name so much), and then Hurley Rolls (not so sure about those), Ben has Beady freakin Eyes Rolls (that's just plain stupid), and What the Heck is Going On...But Who Cares Because This is Yummy Dinner.... Please weigh in on this matter.
Posted by Sara at 7:48 PM

Mmmmmm...looks delightful! I kinda like the name Lost Pie becuase it's made from leftovers that were "lost" in your fridge. Speaking of Lost...is anyone else as lost as I am? Is there an alternate reality going on here...

I think you should name them Pot Pie Rolls. :)

And they looked great. It never occurred to me to use Puff pastry. I usually just throw it in a casserole and toss the puff pastry on top. Yours is prettier and gives you more crust, which is what I end up wanting.

This is one of the best uses for leftovers I've ever seen! You worked wonders with that rump roast. Your daughter is the cutest helper!

Yummy, I love the alien supervisor!!