Hey Baby it's Cold Outside

I would like to announce that it's FREEZING outside. I rarely complain about the weather, but I might complain about the temperature. I'm not sure where the idea of "Comfort Food" originated but I think it must have had to do with nearly freezing to death. This is a wonderful recipe for an Italian style stew called Osso Buco. It is typically made with veal shank, but I like to use beef shank-it is a bit more cost effective as well. The method of braising leaves the most tender meat and beautiful gravy that tastes so great with mashed potatoes.
Now regular mashed potatoes work great with this. But if you don't make the Celebration mashed potatoes with this...promise me that you will make them sometime....they are memorable. 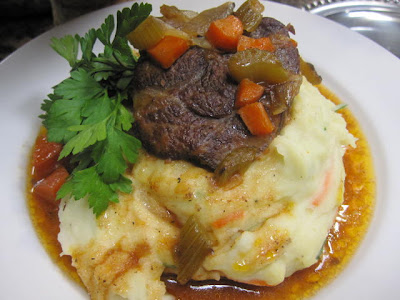 OSSO BUCO
4 beef, veal, or lamb shank
bouquet of rosemary, thyme and parsley (2 sprigs each)
1 bay leaf
4 garlic cloves
2 cups stewed tomatoes
2 teaspoons salt
1 teaspoon pepper
½ cup flour
vegetable oil
2 cups onion, diced
1 ½ cups carrots, diced
1 ½ cup celery, diced
1 cup white wine
2 cups chicken stock
Heat large heavy pot on medium high heat and coat the bottom with vegetable oil. Season the flour with the salt and pepper. Tie each shank tightly with twine. Dredge the shanks in the flour mixture and brown the shanks in the hot oil. Remove shanks when both sides are browned. In the same pot add the vegetables adding just a bit of salt and pepper to them. Saute for a few minutes, and deglaze the pan with the white wine. Cook until liquid is reduced to half and then and add the garlic and tomatoes. Finally add the shanks, boquet, and chicken stock. Cover the pot and place in a 350 degree oven for an hour and a half, turning the shanks about half of the way through. The liquid should get a bit thicker but you do not want it to evaporate. 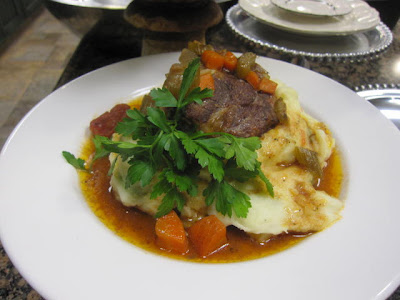