A few weeks ago, one of my few readers, asked if I had a good recipe for BBQ pork sandwiches as well as a rhubarb crisp. Sometime last year I posted one of my favorite recipes for a pork sandwich, but it is apple roasted instead of BBQ. It is here if you would like to check it out Pork Chops and Apple Sauce . Anywho...here is a great recipe for BBQ sandwiches, the rhubarb crisp will come next week. I hope you enjoy. 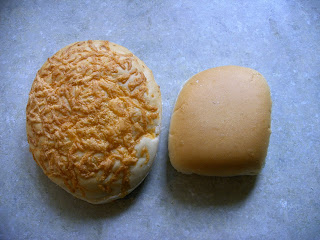 I asked my husband...."do you want the good bun or the other one."

He responded.."they both look good to me."

"surely you jest," I said

"What makes one good and one bad?" He asked

"I didn't say one was bad...one is just better than the other...so I guess you don't care which one it is so you can have a regular bun." I replied

"No, I want the good bun", he quickly said 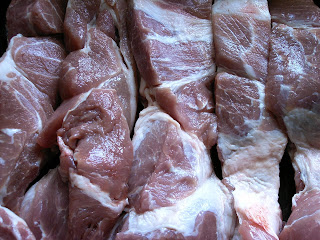 Preheat oven to 350 degrees. Any pork will do, I try and use pork that doesn't have as much fat...makes it easier in the end when you break it up, so that you don't have to cut all the fat off. Place the pork in a heavy pan and add sliced onions and peppers. 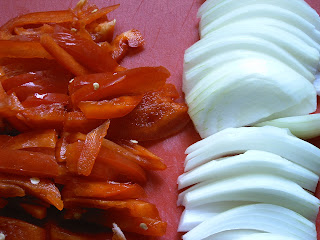 Season generously with salt and pepper. 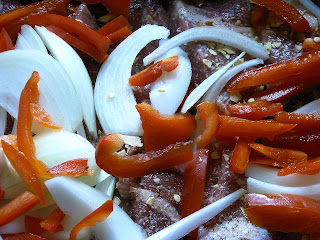 I like to season with dried garlic as well. Fresh garlic will do as well. 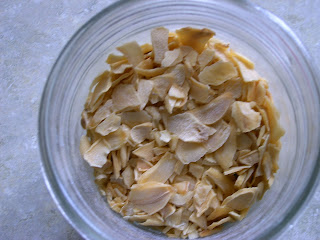 bake uncovered for 40 minutes. Then cover with aluminum foil and reduce oven heat to 250 degrees. Cook for an hour and a half. Remove from oven and let cool for twenty minutes until meat is cool enough to handle. You can shred the pork, or I like to chop it up. 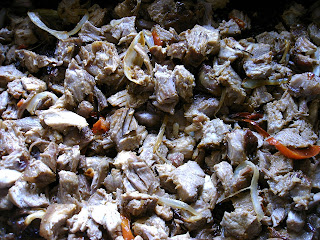 Next, I add all of the remaining ingredients. I just add it all to the meat and mix it well, but if you want to, you can mix it in a bowl first and then pour it over the meat. Cover the meat again and return to the oven at 350 degrees again for 30 minutes. You can cook the meat, onion and peppers in a crock pot during the day if you want and then add the remaining ingredients at the end ( I would suggest combining the ingredients in a saucepan and bringing it to a bubble first...you just want to be sure to cook the sugar.) I like this method best because the meat gets browned and that adds a lot of flavor, but I understand the need for crock potting food by others. 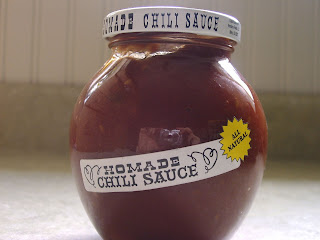 If you don't have home-made chili sauce, I like this brand, It is called "Homade", and it's pretty good in a pinch :) 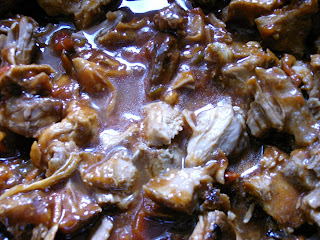 So, once it's cooked, scoop it up and put it on the bun of your choice. 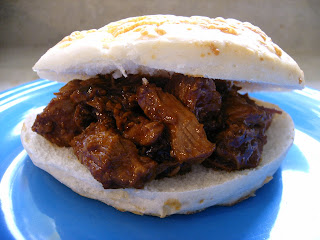