Preheat oven to 350 degrees. Completely rub the roast down with the butter. Stir together the spices and rub into the buttered roast. Mound the stuffing into the roast and then add apple cider to the bottom of the pan. Bake the extra stuffing in a baking dish. After about 30 minutes drizzle the ¼ cup of the syrup over the roast. Repeat this process 30 minutes later. Cover the stuffing after it reaches golden brown with foil but not the roast. Bake for 2 ½ hours or until the roast reaches 155 degrees internal temperature. Remove from the oven and let sit 15-20 minutes covered with foil 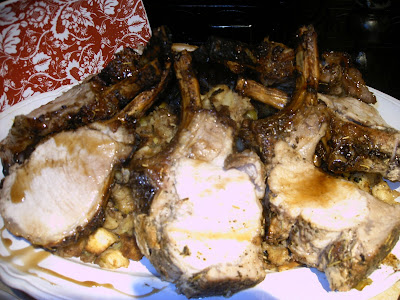 I forgot to take a picture when it was still a Crown Ring...The stuffing you see is the one from Thanksgiving.
Posted by Sara at 8:37 PM