Ladies and gentleman...may I introduce....the yummy! Oh yes, this is a good one....totally simple...but ever impressive. If making a pie makes you nervous, this will ease your fears...you may never go back to a traditional pie. Make it...you will be so happy if you do! 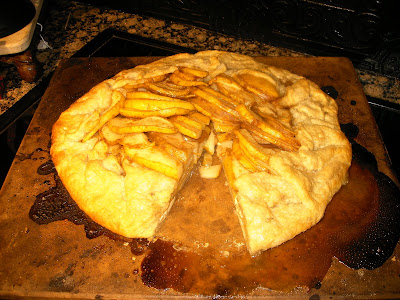 Look at all those yummy juices all bubbly and delicious!

In a medium sized bowl, combine the flour, sugar and salt. Add the butter pieces and, using a pastry blender or 2 dinner knives held between your fingers, cut the butter into the flour and continue until the mixture is crumbly and looks like the size of peas. You can also pulse in a food processor.
Add the water one tablespoon at a time, mixing in between additions (or pulse). You'll notice that a solid piece of dough is forming. If the mixture is still dry and crumbly add another tablespoon of water. The dough is ready when it holds together without crumbling. Best if refrigerated for about an hour.
Shape into a ball and flatten slightly. Try not to overwork this dough with your hands. A quick knead is fine, but your hands give off heat and if you handle it too much it will lose the tenderness and flakiness that makes pie dough so good! 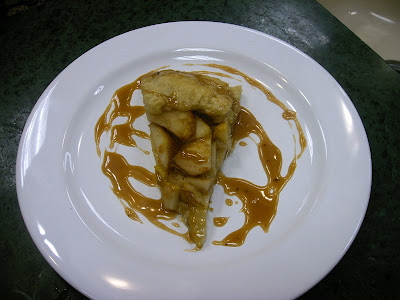 Combine all the ingredients excluding the brown sugar and cream cheese in a bowl and toss. To make a large crostada, use all of the butter crust recipe or split it in half and make two smaller crostadas. You want to roll the dough out just like a pie crust and place it on a pizza stone. If you don't have a pizza stone, a large sheet pan will do (I suggest foiling it first). Spread the cream cheese onto the center of a rolled out pastry crust and sprinkle with the brown sugar. Next add the pear mixture and loosely fold the edges of the crust toward the center. Brush the crust with cream or a beaten egg. Sprinkle with coarse sugar. Bake in a 400 degree oven for 35 minutes or until center is bubbly and crust is golden. 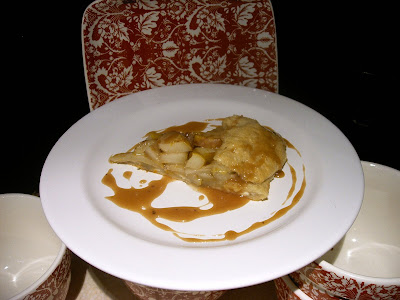 Check back soon for an appetizer.
Posted by Sara at 9:44 PM